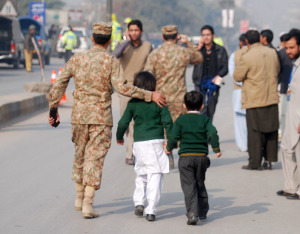 A soldier escorts schoolchildren after they were rescued from the Army Public School that is under attack by Taliban gunmen in Peshawar, December 16, 2014. Taliban gunmen in Pakistan took hundreds of students and teachers hostage on Tuesday in a school in the northwestern city of Peshawar, military officials said. REUTERS/Khuram Parvez (PAKISTANCIVIL LAW – Tags: EDUCATION CIVIL UNREST CRIME LAW) – RTR4I60X

By continuing to use the site, you agree to the use of cookies. more information